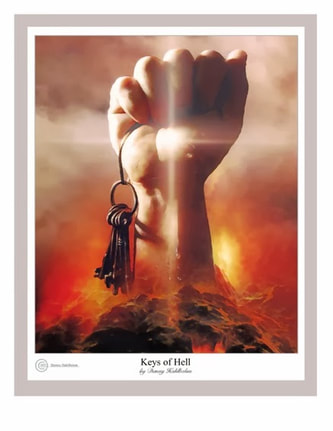 Why Did Jesus Take The Keys?
By Mark Flippo

Revelation Chapter 1:18
I am he that liveth, and was dead; and, behold, I am alive for evermore, Amen; and have the keys of hell and of death.

​Why did He not already have the keys? Remember way back in Genesis, our way back Grandparents Adam and Eve brought sin into this world by listening to the enemy of their soul. The devil was cursed to crawl on his belly and eat the dust of the ground. People want to think that it was turned into a snake. It does not say that. Consider that the works of the flesh are sin and that is what the serpent feeds off of. It is still the same today.
Anytime you sin the serpent receives this and grows from it. He gains its power from your sin. If you want it to starve, stop sinning. Yes, you can if you ask Jesus for help walking in His footsteps. Back to the beginning, I do not have exact scripture for this so forgive me if I offend you. That is when the keys were given to the serpent. After His crucifixion, Jesus went to the lower parts of the earth to show everyone He is in charge of everything. There is nothing He does not have the power over! ​Trust Him with your life and you will receive a great reward at the end of this portion of your physical being.