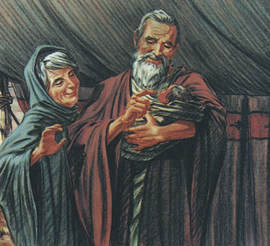 The Wonder Boy
By Mark Flippo

Genesis 21: (NIV)
1-Now the Lord was gracious to Sarah as he had said, and the Lord did for Sarah what he had promised. 2-Sarah became pregnant and bore a son to Abraham in his old age, at the very time God had promised him. 3-Abraham gave the name Isaac[a] to the son Sarah bore him. 4-When his son Isaac was eight days old, Abraham circumcised him, as God commanded him. 5-Abraham was a hundred years old when his son Isaac was born to him. 6-Sarah said, “God has brought me laughter, and everyone who hears about this will laugh with me.” 7-And she added, “Who would have said to Abraham that Sarah would nurse children? Yet I have borne him a son in his old age.”

Now I am not saying that Isaac was a super human but in their eyes he was more than they could have hoped for. God kept His promise! He always does. Has He ever promised you anything? Abraham was one hundred years old when this baby was born. Now talk about waiting on God a long time, WOW!
If He has given you something it may not come in your life time but it will come. He has promised to save our children and He will in His time not ours. He plans long term. We are used to short term satisfaction. In this electric age everything is so fast that we have adopted that same mindset in the things we want! That has been a curse to people now days. We have lost the ability to wait upon the LORD! So He must work with us and build our Faith and our Patience. God I ask you to help every reader with these pressing issues that we struggle with in Jesus Name!