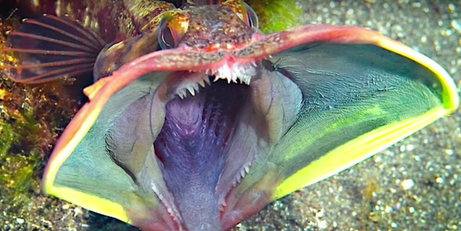 Stuff Of Nightmares
By Mark Flippo

Sarcastic Fringehead Fish. When two fringeheads have a territorial battle, they wrestle by pressing their distended mouths against each other, as if they were kissing. This allows them to determine which is the larger fish, which establishes dominance. They can be up to 30 centimetres (12 in) long, elongate and slender, and are mostly scaleless with great pectoral fins and reduced pelvic fins. They tend to hide inside shells or crevices. After the female spawns under a rock or in clam burrows the male guards the eggs

It looks like it should be in a movie. How odd is this one fish?
It is so bright and colorful. My, what a big mouth it has. A big mouth in this case is a good thing. You become the dominate fish of that species. I have had friends that had a big mouth on them and they just brought attention on themselves. That can be a negative most times. It seems to show that the person is very insecure in themselves.
​ If you know someone like that make a friend of them by showing God's Love to them. They need a good friend. Not one that talks about them behind their back. They need to know you will be their friend in the good times and the bad. You will not tell what they say to you privately to others. Love them into the Kingdom of God. If they already know Jesus help them to grow in the knowledge of Jesus Christ.