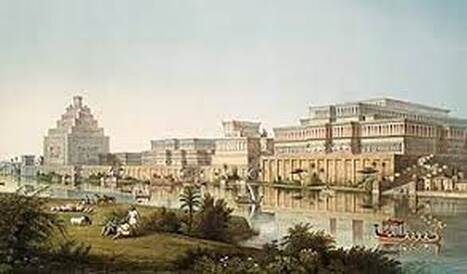 Nineveh Was A Great Loss.
By Mark Flippo

​It took three days to walk across. There were more than 100,000 people living there. It took three day to cross. It around 2 1/2 - to 3 miles wide. Nineveh is mentioned in the Bible, most notably in The Book of Jonah, where it is associated with sin and vice. The city was destroyed in 612 BCE by a coalition led by Babylonians and Medes which toppled the Assyrian Empire. An ancient Assyrian city of Upper Mesopotamia, located on the outskirts of Mosul in modern-day northern Iraq. It is located on the eastern bank of the Tigris River and was the capital and largest city of the Neo-Assyrian Empire, as well as the largest city in the world for several decades.
Today, it is a common name for the half of Mosul that lies on the eastern bank of the Tigris, and the country's Nineveh Governorate takes its name from it. It was the largest city in the world for approximately fifty years until the year 612 BC when, after a bitter period of civil war in Assyria, it was sacked by a coalition of its former subject peoples including the Babylonians, Medes, Persians, Scythians and Cimmerians. The city was never again a political or administrative centre, but by Late Antiquity it was the seat of a Christian bishop. It declined relative to Mosul during the Middle Ages and was mostly abandoned by the 13th century AD.

Jonah Goes to Nineveh. Jonah 1
3 Then the word of the Lord came to Jonah a second time: 2 “Go to the great city of Nineveh and proclaim to it the message I give you.” 3 Jonah obeyed the word of the Lord and went to Nineveh. Now Nineveh was a very large city; it took three days to go through it. 4 Jonah began by going a day’s journey into the city, proclaiming, “Forty more days and Nineveh will be overthrown.” 5 The Ninevites believed God. A fast was proclaimed, and all of them, from the greatest to the least, put on sackcloth.
6 When Jonah’s warning reached the king of Nineveh, he rose from his throne, took off his royal robes, covered himself with sackcloth and sat down in the dust.
​7 This is the proclamation he issued in Nineveh: “By the decree of the king and his nobles:
Do not let people or animals, herds or flocks, taste anything; do not let them eat or drink. 8 But let people and animals be covered with sackcloth. Let everyone call urgently on God. Let them give up their evil ways and their violence. 9 Who knows? God may yet relent and with compassion turn from his fierce anger so that we will not perish.” 10 When God saw what they did and how they turned from their evil ways, he relented and did not bring on them the destruction he had threatened.