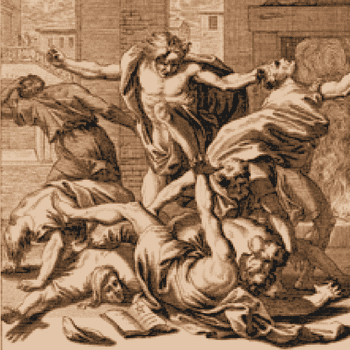 Careful What Name You Use
By Mark Flippo

Acts 19:15-16 (MSG)
Some itinerant Jewish exorcists who happened to be in town at the time tried their hand at what they assumed to be Paul’s “game.” They pronounced the name of the Master Jesus over victims of evil spirits, saying, “I command you by the Jesus preached by Paul!” The seven sons of a certain Sceva, a Jewish high priest, were trying to do this on a man when the evil spirit talked back: “I know Jesus and I’ve heard of Paul, but who are you?” Then the possessed man went berserk—jumped the exorcists, beat them up, and tore off their clothes. Naked and bloody, they got away as best they could.

Do you know anyone that is like the sons of Sceva? Sadly there are those that have not earned the right to cast out demons. It can be done if you have grown in your level with the Master. I know a prophet that it is common for Him to cast out the unclean. He paid for that privilege. First God called him to carry the mantle of a prophet. Then he had to learn through many experiences how to conquer those things. Tread very lightly! Never do anything without God's direction! Be careful people no one wants to see you naked and running through the congregation!