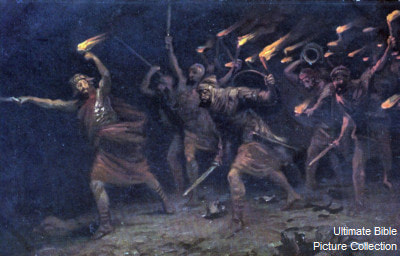 Judges 7:
19-So Gideon and the hundred men who were with him came to the outskirts of the camp at the beginning of the middle watch, when they had just posted the watch; and they blew the trumpets and smashed the pitchers that were in their hands. 20-When the three companies blew the trumpets and broke the pitchers, they held the torches in their left hands and the trumpets in their right hands for blowing,
​and cried, “A sword for the Lord and for Gideon!” 21-Each stood in his place around the camp; and all the army ran, crying out as they fled. 22-When they blew 300 trumpets, the Lord set the sword of one against another even throughout the whole army; and the army fled as far as Beth-shittah toward Zererah, as far as the edge of Abel-meholah, by Tabbath

They were in one mind and one accord! Any group that can put aside any differences and work as one can accomplish anything. If God is in it, Victory will be yours. Many times throughout history this has been proved out to be true. So many wars but they eventually had an outcome that was positive for the victors. Massive amount of mountains have been moved to make way for new highways. Huge dams have been constructed. I am sure you can think of other things that have shown this principle to be True. We just have to set our minds with God's mind. Willing to follow Him and have no fear. The unclean will fall before Christ as they always have. Fight on Christian Soldiers!