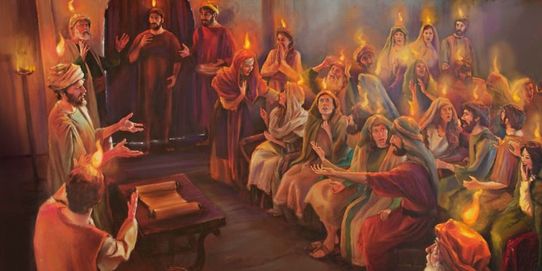 Numbers 1:
50-Instead, you are to appoint the Levites over the tabernacle of the testimony, all its furnishings, and everything in it. They shall carry the tabernacle and all its articles, care for it, and camp around it. 51-Whenever the tabernacle is to move, the Levites are to take it down, and whenever it is to be pitched, the Levites are to set it up.
​ (120 Levites)
Acts 1:
13-When they arrived, they went to the upper room where they were staying: Peter and John, James and Andrew, Philip and Thomas, Bartholomew and Matthew, James son of Alphaeus, Simon the Zealot, and Judas son of James. 14-With one accord they all continued in prayer, along with the women and Mary the mother of Jesus, and with His brothers. 15-In those days Peter stood up among the brothers (a gathering of about a hundred and twenty) and said,…

The number 120 can symbolize a divinely appointed time of waiting. After God saw how sinful and dedicated to evil man had become after the garden of Eden, he determined a one hundred and twenty year period would be given for repentance and then the flood waters would come (Genesis 6:1 - 3). The meaning of the number 120 is seen in its Exodus role when Israel left Egyptian bondage. Scripture states that the Israelites who left Egypt had 600,000 men (Exodus 12:37). When the Egyptians heard about their former slaves leaving the country they complained to Pharaoh, who then amassed 600 chariots to pursue the children of Israel (14:5 - 7). 600,000 is 120 times 5,000 and 600 is 120 times 5.

We need to make sure we are prayed up into the Holy Ghost so that, if God uses 120 we will be on the right side of that number. Sadness to those that find themselves on the wrong side of judgement.