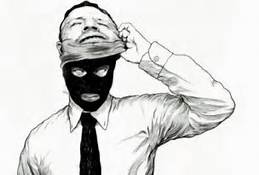 Hiding The Real You!
By Mark Flippo

Luke 12: (MSG)
1-3 By this time the crowd, unwieldy and stepping on each other’s toes, numbered into the thousands. But Jesus’ primary concern was his disciples. He said to them, “Watch yourselves carefully so you don’t get contaminated with Pharisee yeast, Pharisee phoniness. You can’t keep your true self hidden forever; before long you’ll be exposed. You can’t hide behind a religious mask forever; sooner or later the mask will slip and your true face will be known. You can’t whisper one thing in private and preach the opposite in public; the day’s coming when those whispers will be repeated all over town.

There seems to be different degrees of putting up a fake front with each of us! Some are almost total phonies. They are the saddest cases to know. Which of the people you know is the worst about putting forth a fake front? We all want people to believe the best about us. We all want to be liked. That is basic human nature.
We want friends. What good is a friend if they have grown to like the fake you that you put up for them to see? Make sure your friends are not just fair weather friends.
Who would want friends that only talk to you when they want something? We have found that out more than once. It is sad. Sometimes they are nice people, but they are just shallow. Let the real you show all the time. If there is a part of you that you know needs to be worked on, just pray and ask Jesus to help you clean that part out.
I know a sister from church that said she was a complainer that it started to bother her about herself. One Friday night during prayer she went to the alter and asked God to help change her mindset! Guess what, He did! On Monday she worked and went through her day without thinking about it. She arrived home and stopped to think about her day and she said to her husband
"I have not complained once today!" Hallelujah! As the case in some jobs she worked hard and when Friday came she realized she had gone the whole week without once complaining! She began to Praise God for working that attitude out of her life. No complaints has made her feel so light when she walks. That was a weight that she prayed out of herself. What do you need to get rid of in your personality?