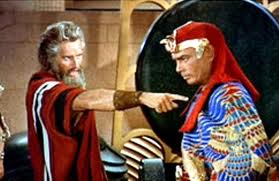 All is not peaceful when to rulers of two nations get together. Look at the USA. So much fighting in government. I am not sure which one is being the immature man? They are so much like kids and they want to take their toys home with them. They do not play well with each other.
​Pharaoh did not accept anyone telling him how to run his country. God used Moses as His mouthpiece. He was Pharaoh, his heart and mind were hardened by God. God's plan was to destroy all of their false gods! No nation after that could point any fingers at Moses and say your God did not deliver you! He shut the mouths of all idol worshipers everywhere! When you are young, brothers argue and fight. When you get older as an adult just make sure that if your brother is called by God tread very softly before him. Do not wind up on the wrong side of history!