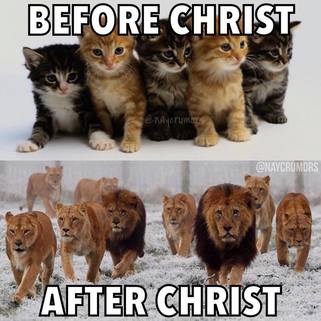 Psalms 34:10 - The young lions do lack, and suffer hunger: but they that seek the LORD shall not want any good [thing].
Proverbs 28:1 - The wicked flee when no man pursueth: but the righteous are bold as a lion.

When it comes to being a True Christian there are times of increased Faith that we can feel like nobody better mess with me because my Father will get you! You know the old my Father can beat your father. The devil has been stomped on so many times over the years you might think it would just give up instead of fighting a Real Christian. You know like with Saul in the Old Testament who was sent an unclean spirit to prove a point. Don't argue with God. Don't touch His children. That should make you put your shoulders back and walk upright like you own where you are entering. We are the kings and queens of the earth.