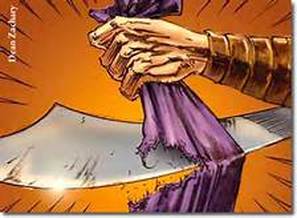 The Respectful Cut!
By Mark Flippo

1 Samuel 24: (MSG)
There was a cave there and Saul went in to relieve himself. David and his men were huddled far back in the same cave. David’s men whispered to him, “Can you believe it? This is the day God was talking about when he said, ‘I’ll put your enemy in your hands. You can do whatever you want with him." Quiet as a cat, David crept up and cut off a piece of Saul’s royal robe. (After Saul left, David called to him from the cave!) Saul said, “Can this be the voice of my son David?” and he wept in loud sobs. “You’re the one in the right, not me,” he continued.
​ “You’ve heaped good on me; I’ve dumped evil on you. And now you’ve done it again—treated me generously. God put me in your hands and you didn’t kill me. Why? When a man meets his enemy, does he send him down the road with a blessing? May God give you a bonus of blessings for what you’ve done for me today! I know now beyond doubt that you will rule as king. The kingdom of Israel is already in your grasp! Now promise me under God that you will not kill off my family or wipe my name off the books.”

If you have a leader that is doing wrong it is not OK to come against them in a harsh way. God set leaders in their place and will remove them when He is ready! Come before them in humility like David did. There are many that are bad mouthing them. You do not need to pile on.

Proverbs 15: (KJV)
1-A soft answer turneth away wrath: but grievous words stir up anger.
2-The tongue of the wise useth knowledge aright: but the mouth of fools poureth out foolishness.
3-The eyes of the Lord are in every place, beholding the evil and the good.​
​
The scriptures plainly tell us how to behave! Now you know!
I hope you behave according to God's Holy Word!