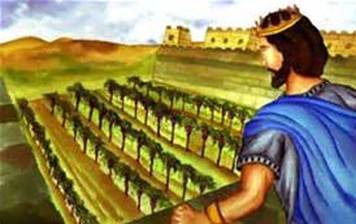 1 Kings 21:
8-So she wrote letters in Ahab's name, and sealed them with his seal, and sent the letters unto the elders and to the nobles that were in his city, dwelling with Naboth.
9-And she wrote in the letters, saying, Proclaim a fast, and set Naboth on high among the people:
10-And set two men, sons of Belial (devil), before him, to bear witness against him, saying, Thou didst blaspheme God and the king. And then carry him out, and stone him, that he may die.
11-And the men of his city, even the elders and the nobles who were the inhabitants in his city, did as Jezebel had sent unto them, and as it was written in the letters which she had sent unto them.
12-They proclaimed a fast, and set Naboth on high among the people.
13-And there came in two men, children of Belial (devil), and sat before him: and the men of Belial (devil) witnessed against him, even against Naboth, in the presence of the people, saying, Naboth did blaspheme God and the king. Then they carried him forth out of the city, and stoned him with stones, that he died.

That Jezebel was a devil in flesh. She is mentioned a few different times in scripture. She was probably possessed by an unclean spirit. In Revelation it mentions that spirit by name.
It is an ugly spirit. It is present in every time period. There are women out there that behave the same way as the woman in Judges did. If you ever meet anyone like that pray for them they may not even realize the character they are showing out with. Jesus help all of us be sensitive to your Voice and let us know when we are around people that have an unclean spirit!