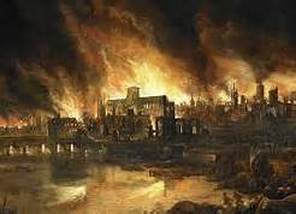 Burn It All Down!
By Mark Flippo

Ezekiel 16:49-50 - Behold, this was the iniquity of thy sister Sodom, pride, fullness of bread, and abundance of idleness was in her and in her daughters, neither did she strengthen the hand of the poor and needy.

This was a warning of what brought Sodom and the cities of the plain down. There were too many sins to name. Are you surprised at the list above? Are you guilty of any of these sins? It was not only because of all of the sexual perversions but it included not helping the poor. Did you think that not helping the needy would have been a part of Sodom's sins? This world is just as bad as those cities were.
Why would anyone think that we will be OK? Judgement fell on them and it is falling on us as well. One point two million babies are aborted each year. Innocent blood cries out from the ground. God sees and knows those that have fallen into the sin of murder. Yes those babies were viable lives.
​Our earth is cursed because of people that have lost their moral compass. Get back on track and know the mind of our God and His laws that do not change for our convenience.