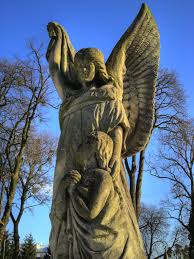 It was a very sad day for our family. Our Niece had a fight with her boyfriend and was so broken hearted that she was driving home through a subdivision too fast. She rounded this one corner and lost control of her car. She took out the mailbox and ran into the child's bedroom of this house. She was killed instantly. Here is where the angel became involved. The parents were sleeping when they heard this huge crash! They jumped up out of bed and ran toward their son's bedroom. Out in the hall, there was their toddler son with not even a scratch on him waiting!
​They asked him if he was alright! He said " I was sleeping and a tall man in white clothes came and took my hand and said "Do not be afraid," so I went with him to the hallway. Then I heard a big crash." The parents did not see the angel. God knew this terrible thing was going to happen and spared this little child because God knew what was in his future. The loss of my niece was tragic, but a miracle happened!