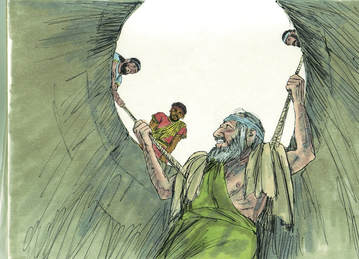 Jeremiah 38: (NCV)
He said: 2-“This is what the Lord says: ‘Everyone who stays in Jerusalem will die from war, or hunger, or terrible diseases. But everyone who surrenders to the Babylonian army will live; they will escape with their lives and live.’ 3-And this is what the Lord says: ‘This city of Jerusalem will surely be handed over to the army of the king of Babylon. He will capture this city!’”
5-King Zedekiah said to them, “Jeremiah is in your control. I cannot do anything to stop you.”
6-So the officers took Jeremiah and put him into the well of Malkijah, the king’s son, which was in the courtyard of the guards. The officers used ropes to lower Jeremiah into the well, which did not have any water in it, only mud. And Jeremiah sank down into the mud.

Why is it people do not like to hear the Truth when it does not line up with what they want? That is what happened to Jeremiah. There were some who still respected the prophet. They came and helped the king to change his mind and have him pulled out of the well. This is just one example of how God's people that bring messages from Him to others are not always received well. It does not matter if you like what they have to say but you must try the spirit and know if it is of God! If it is True you are a fool to try and stop what is to happen. You are better off bowing before God and praying for Him to have His way with your life and with your family and friends!