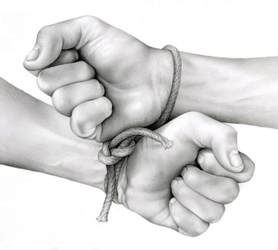 Don't Let Others Tie Your Hands
By Mark Flippo

Luke 17:1-4 (ESV)
And he said to his disciples, “Temptations to sin are sure to come, but woe to the one through whom they come! It would be better for him if a millstone were hung around his neck and he were cast into the sea than that he should cause one of these little ones to sin. Pay attention to yourselves! If your brother sins, rebuke him, and if he repents, forgive him, and if he sins against you seven times in the day, and turns to you seven times, saying, ‘I repent,’ you must forgive him.”

How many times do you remember that your hands were tied for one reason or another? When you were a child it was on many occasions because your parents said so. In school maybe it was because of a teacher that told you not to because they felt it was wrong. If you ever received a speedy ticket it you were told no by a policeman. It was against the law.
When you become involved in the workforce you have more bosses than you can shake a stick at. You will hear no, a lot from them. Of course, the Bible tells you that you should not because it is a sin. Well the devil wants to tie your hands and keep you from working for the Kingdom of God. The last one is a loser. We must feel a freedom to bring Glory to God!
Working for Him is wonderful.
If He tells you no He will give you a better way of doing things. I Love to feel Him give me a yes to a question I have asked Him. Feeling after His Spirit takes time to learn but it is worth it when you can sense His presence near! When He touches you ever so tenderly to pray for someone or go and visit this soul that is so sick they can not come to service. Let Him direct your paths and He will delight in you!​
​
​http://moderndayparablesrcf.com
Powered by