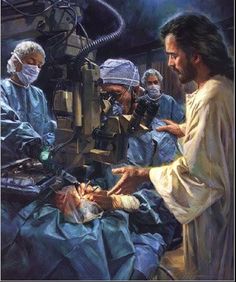 Jesus With You During Surgery
By Mark Flippo

Romans 5:3-4 ESV
More than that, we rejoice in our sufferings, knowing that suffering produces endurance, and endurance produces character, and character produces hope,
1 Peter 5:7 ESV
Casting all your anxieties on him, because he cares for you.

This is so needed today now more than ever. I have had many surgeries. There have been three major mistakes with doctors. The first one was only supposed to remove my Gallbladder but instead cut me from the bottom of my rib cage to my crotch. The second was in an Urgent care place. She told me I just had a bad cold or flu but did not check my blood for other issues. I could not stand up and that is when I learned it was gallstones.
​The third doctor said I just had a tear
​ in my colon but I had to return to the ER because it was an abscess. As soon as the ER room doctor touched it, it burst in his hand. In spite of doctors that made blunders God was with me! My wife has really learned how to pray. I tend to keep her praying on her knees! If you are one that seems to own part of a hospital by going so often you need to have God on speed dial. I hope you have a wonderful praying mate that keeps you going when you feel like you want to give up!