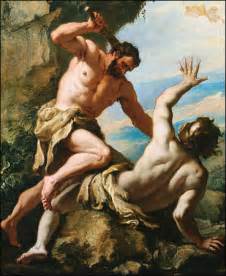 The Hateful Brother!
By Mark Flippo

Genesis 4:1-11
4-And Abel also brought an offering—fat portions from some of the firstborn of his flock. The LORD looked with favor on Abel and his offering, 5-but on Cain and his offering he did not look with favor. So Cain was very angry, and his face was downcast. 6-Then the LORD said to Cain, “Why are you angry? Why is your face downcast? 7-If you do what is right, will you not be accepted? But if you do not do what is right, sin is crouching at your door; it desires to have you, but you must rule over it.”
​ 8-Now Cain said to his brother Abel, “Let’s go out to the field.” While they were in the field, Cain attacked his brother Abel and killed him. 9-Then the LORD said to Cain, “Where is your brother Abel?” “I don’t know,” he replied. “Am I my brother’s keeper?” 10-The LORD said, “What have you done? Listen! Your brother’s blood cries out to me from the ground. 11-Now you are under a curse and driven from the ground, which opened its mouth to receive your brother’s blood from your hand.
​
There is always a certain amount of friction between brothers. I have a brother and we are different as day and night. Our parents brought us to service Sunday morning, Sunday night and Wednesday night. Every week. My dad was the Sunday school superintendent and mom played the piano. We were Faithful like clockwork. So it is built into us to attend service regularly.
Now our understanding on almost everything is different. He is a slob of a housekeeper.
I am the opposite. We fought all of the time growing up. I never considered killing him. Cain did not bring an approvable offering to God. The unclean must have been motivating him. His whole heart and attitude were wrong. Any brothers out there be kind to one another at least from time to time. Now not too much or they will think aliens have replaced you with a duplicate.
​It is OK to argue as long as you do not let it get out of control. Make sure you can say you're sorry afterwards. Don't stop talking to him just because your upset. Communication is so needful. Love them even when they are unlovable. If they fall into drugs they need you to be a prayer warrior for them. That is the only hope of ever getting them back! Jesus help us brothers to hold one another up in prayer.