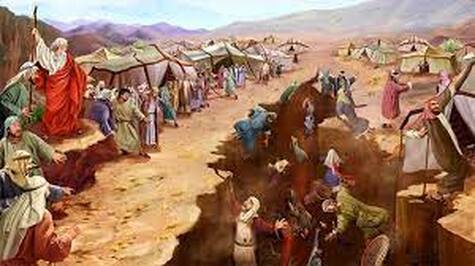 This lesson is found in Numbers.
The Sons of Korah were the sons of Moses' cousin Korah. The story of Korah is found in Numbers 16. Korah led a revolt against Moses; he died, along with all his co-conspirators, when God caused "the earth to open her mouth and swallow him and all that pertained to them"
(Numbers 16:31-33). "Does a house filled with the books of the Law need a mezuzah?" Moses replied that it did; whereupon Korah said: "The presence of the whole Torah, which contains 175 chapters, does not make a house fit for habitation, yet you say that one chapter of it does so. It is not from God that you have received these commandments; you have invented them yourself." He then assembled 250 men, chiefs of the Sanhedrin, and, having clad them in tallit of blue wool, but without fringes, prepared for them a banquet.
Aaron's sons came for the priestly share, but Korah and his people refused to give the prescribed portions to them, saying that it was not God but Moses who commanded those things. Moses, having been informed of these proceedings, went to the house of Korah to effect a reconciliation, but the latter and his 250,000 followers rose up against him.(10)
​ Korah consulted also his wife, who encouraged him in the revolt, saying: "See what Moses has done. He has proclaimed himself king; he has made his brother high priest, and his brother's sons priests; moreover, he has made you shave all your hair[11] in order to disfigure you." Korah answered: "But he has done the same to his own sons." His wife replied: "Moses hated you so much that he was ready to do evil to his own children provided the same evil would overtake you".[12] Be careful who you take advice from. Even your wife can be wrong! Use your own discretion about mentioning this story to her.