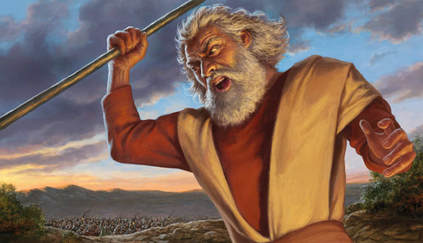 The Prophet In Action
By Mark Flippo

1 Kings 18:
18-Elijah answered, “I have not made trouble in Israel. You and your father’s family have made all this trouble by not obeying the Lord’s commands. You have gone after the Baals. 19-Now tell all Israel to meet me at Mount Carmel. Also bring the four hundred fifty prophets of Baal and the four hundred prophets of Asherah, who eat at Jezebel’s table.”
40-Then Elijah said, “Capture the prophets of Baal! Don’t let any of them run away!” The people captured all the prophets. Then Elijah led them down to the Kishon Valley, where he killed them.

He must have been a mighty man. He killed 850 men that day. I would think his shoulders would have been hurting. Not all of those he killed went willingly. Some may have put up a fight. They had cut themselves so they would have been weakened somewhat. His hands must have been worn out. His wrists may have felt like jello when he was done. God did not mess around with sin back then. Now, some think He has softened up on sin but that is not true. He has given us Grace but that is no excuse to sin! Sin still carries the same punishment, death! You may even be given over to a more painful death. It does happen! Don't mess with God, you will lose every time!