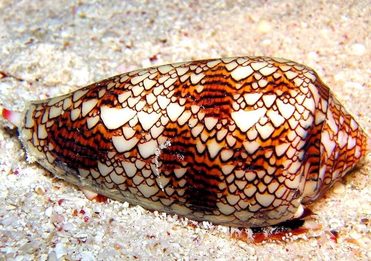 Beautiful But Deadly
By Mark Flippo

The Cone Snail has teeth containing venom that can stop nerve cells from communicating, resulting in paralysis. So far there is no anti-venom, so fight the temptation and stay away from these guys.

This is an example of what sin can do to you. Sin can be pretty to look at but deadly to touch. How many have fallen into sins trap and never came out? They died in their sin. How tragic. They became so poisoned that they could never believe they could be healed! Their faith destroyed so they never asked for forgiveness. They just kept saying they had gone too far to be forgiven. Have you ever heard someone say that? I have. It is never true. If it were you would be saying your sin was greater than Jesus' ability to forgive sin. There is no sin that Jesus' blood can not wash away! Never be fooled by an unclean tongue, person or spirit. Jesus can wash anyone clean!