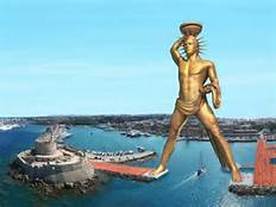 They Made Their Dreams Come True
By Mark Flippo

The Colossus of Rhodes was one of the Seven Wonders of the Ancient World, and the most ambitious and tallest statue of the Hellenistic period. The last of the seven wonders to be completed, it was a statue built to thank the gods for victory over an invading enemy. Bearing a striking resemblance to the Statue of Liberty in the United States, the Colossus of Rhodes stood for less than sixty years before being destroyed by an earthquake.

Proverbs 16:3 ESV
Commit your work to the Lord, and your plans will be established.
Proverbs 19:21 ESV
Many are the plans in the mind of a man, but it is the purpose of the Lord that will stand.

Basically what these scriptures refer to is bringing your hopes and dreams to Him before you act on them. He knows what is best. He knows if this venture will pay for itself or if you will loose your shirt on this. He is a wonderful safety net for all of your hopes and dreams. Ask Him before you do anything major. I have even asked Him before for minor things. It never hurts and can only help you. Jesus will be there for you if you let Him direct your life!