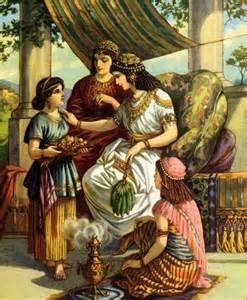 No Small Parts
By Mark Flippo

​2 Kings 5:
​2-At this time Aramean raiders had invaded the land of Israel, and among their captives was a young girl who had been given to Naaman’s wife as a maid. 3-One day the girl said to her mistress, “I wish my master would go to see the prophet in Samaria. He would heal him of his leprosy.”
4-So Naaman told the king what the young girl from Israel had said.

This young girl is only mentioned in three scriptures but was instrumental in one of the greatest Miracles of the Bible!
Without her testimony of how Naaman could be healed it would not have happened. Do you feel like you are not important? If you do you are very wrong. Every Word that God gives to someone changes their lives forever! There are no small Christians. His kingdom will always remain the most important work we could ever be involved with! Praise God for allowing us to do anything for Him. You are Blessed!