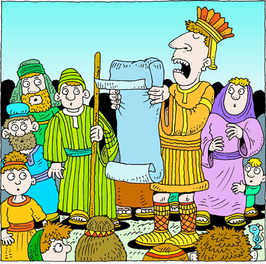 Ezra 1:
1-In the first year of King Cyrus of Persia, in order to fulfill the Lord’s message spoken through Jeremiah, the Lord stirred the mind of King Cyrus of Persia. He disseminated a proclamation throughout his entire kingdom, announcing in a written edict the following:
2-“Thus says King Cyrus of Persia:
“‘The Lord God of heaven has given me all the kingdoms of the earth. He has instructed me to build a temple for him in Jerusalem, which is in Judah. 3-Anyone from his people among you (may his God be with him!) may go up to Jerusalem, which is in Judah, and may build the temple of the Lord God of Israel – he is the God who is in Jerusalem. 4-Anyone who survives in any of those places where he is a resident foreigner must be helped by his neighbors with silver, gold, equipment, and animals, along with voluntary offerings for the temple of God which is in Jerusalem.’”

​When God gives you a work to do others will help. Those that came to rebuild the temple brought from their neighbors gifts to be used for this purpose. God always knows what your needs will be. Do you think He would ask you to do anything that was impossible? He always prepares the way in every avenue of life's needs. Don't be discouraged if things are hard at first. You learn more in the hard times than the good. Yes, He still Loves you! He remembered you when He had a special work to be done. He chose you! Be grateful with Praise in your heart, not stress in your mind. He will bare your burden with you. Remember He is the one that gave it to you!