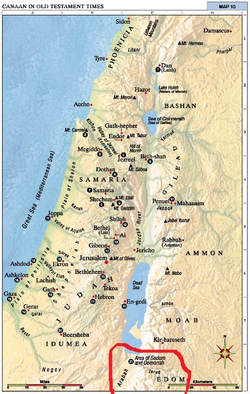 According to the Torah, the kingdoms of Sodom and Gomorrah were allied with the cities of Admah, Zeboim and Bela. These five cities, also known as the "cities of the plain" (from Genesis in the Authorized Version), were situated on the Jordan River plain in the southern region of the land of Canaan. The plain, which corresponds to the area just north of the modern-day Dead Sea,[5] was compared to the garden of Eden[Gen.13:10] as being well-watered and green, suitable for grazing livestock.
Divine judgment by God was passed upon Sodom and Gomorrah and two neighboring cities, which were completely consumed by fire and brimstone.