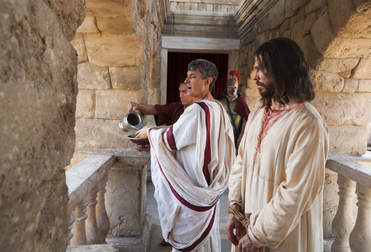 Did Pilate Sin?
By Mark Flippo

Matthew 27:24 (NIV)
When Pilate saw that he was getting nowhere, but that instead an uproar was starting, he took water and washed his hands in front of the crowd. “I am innocent of this man’s blood,” he said. “It is your responsibility!”

The short answer is yes. It did not matter that he washed his hands. The sin was still on his head. Since he lived in Old Testament times he would have needed to go to the temple an offer a sacrifice to have the sin rolled forward to the cross.
He did not do that. He died with this on his soul. The thief was forgiven for his sins.
He went to be with Jesus when he died. If you sin you have one recourse to clean up your soul. You must repent, turn away from your sin and walk with Jesus. Have you done that? Have you been baptized in Jesus name? The Bible does say do all things in His name. Repenting is an ongoing process. Whenever you sin, do not take a chance of dying without it being put under the washing Power of His Blood! Be free of your past. Only the devil will remind you of what you used to do. In Jesus, once they are under the Blood He does not see them any longer. They are not held against you.