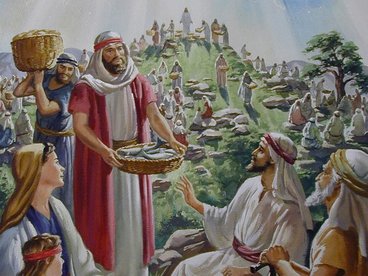 Something Smells Fishy
By Mark Flippo

Luke Chapter 9:
14-For they were about five thousand men. And he said to his disciples, Make them sit down by fifties in a company. 15-And they did so, and made them all sit down.
16-Then he took the five loaves and the two fishes, and looking up to heaven, he blessed them, and brake, and gave to the disciples to set before the multitude.
17-And they did eat, and were all filled: and there was taken up of fragments that remained to them twelve baskets.

We could wipe out the problem of hunger in today's world if we did things the way Jesus did! They all ate until they were satisfied. After eating there were twelve baskets full of bread and fish still to eat. Almost like eating at my mother-in-laws. She always fixes us food to take home, bless her LORD, she is a sweetie. Since the LORD multiplied food back then, He could do it again. He is the same yesterday, today and forever. Do you have the Faith for that to happen in your community? He will work Miracles in you and around you if you have the Faith and it is His will.