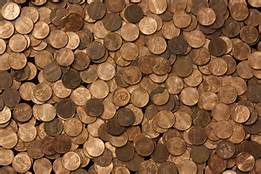 A Penny For Your Thoughts
Shared By Mark Flippo

A Man Saves Each Penny Since The ‘70s, Then The Bank Reveals That He Has An Amount More Than Thursday turned out to be shocking for a Louisiana man. Till that very day, the man, Otha Anders used to save his coins unbelievably for about 45 long years. These all were kept by him in fifteen water jugs of five gallons each. He says about the habit, “I became convinced that spotting a lost or dropped penny was an additional God given incentive reminding me to always be thankful.”
This man used to even break dollars if that could fetch him some more pennies. “If I was at someone’s house and I found a penny, I would pick it up and I would keep it. I will always tell the person that if it was a quarter, I would give it back, but since it is a penny, I’m keeping it,” he says.
​Anyway, no insurance policy could cover his impressive collection, so he was compelled to change the coins to cash. It took a full five hours so as to count his collection of pennies at the bank and you would understand why when you see the amount. The coin counting machine bags had to be replaced for every 100 dollars and you won't believe what its aggregate was a staggering $5,136.14!