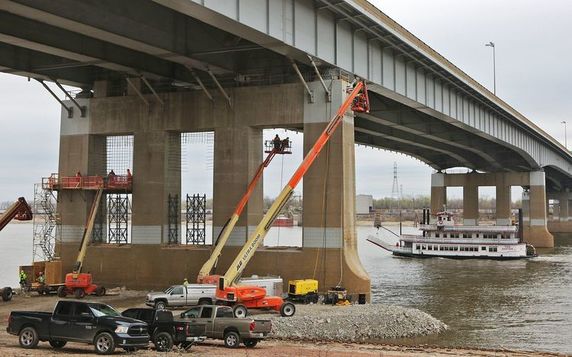 On Saturday, construction crews are scheduled to carry out the relatively unusual maneuver of picking up and moving the four eastbound lanes on the Poplar Street Bridge 9 feet to the south. That will allow space to build a new fifth eastbound lane between now and December, when the bridge project is expected to be completed. The westbound lane total will remain at four. Widening the Poplar Street Bridge Missouri and Illinois are adding a fifth eastbound lane to the bridge and making other updates. The $54 million project aims to ease traffic congestion. The slide and new eastbound lane are just part of a $54 million overhaul aimed at reducing traffic congestion, improving safety and extending the life of the Mississippi River bridge, which opened in 1967, another 25 to 30 years.
The Missouri Department of Transportation, which is in charge of the project, says the shift of the 2,165-foot-long section of roadway will be the second longest bridge slide in U.S. history. That includes the record-holder for length, a 2,427-foot replacement bridge built in 2014 across the Ohio River between Milton, Ky., and Madison, Ind. Forneris said 26 hydraulic jacks on the piers will raise the 20.4-million-pound stretch of roadway about an inch; the moving process involves special pads and a slide track. She said the shift will take as long as 12 hours, beginning about 7 a.m.

Isn't it amazing the knowledge God gives us. Who could have ever imagined just a few years ago that a huge bridge could be moved in this way! I am just gob-stopped/amazed at this wonderful construction process. The moving only took 12 hours. If you do not believe that God is far more above us in all things, you may need to reexamine your thinking.