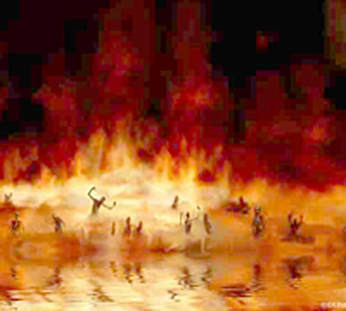 The Lake Of Fire
By Mark Flippo

Revelation 20:10 - And the devil that deceived them was cast into the lake of fire and brimstone, where the beast and the false prophet [are], and shall be tormented day and night for ever and ever.
Revelation 21:8 - But the fearful, and unbelieving, and the abominable, and murderers, and whoremongers, and sorcerers, and idolaters, and all liars, shall have their part in the lake which burneth with fire and brimstone: which is the second death.
Revelation 20:15 - And whosoever was not found written in the book of life was cast into the lake of fire.

God might as well of named names talking about those that will end up in hell and then the lake of fire because it says in Revelation that hell will be cast into the Lake of Fire! Thinking through those that you have met do you think of names that will inherit that lake of fire? Now have you taken time to pray them out of that horrible place? How many have you witnessed to lately? Who is coming Faithfully to service that you brought life to? Heavy are the shoulders that belong to the righteous! When we accept a burden for the lost we will feel that urgency to pray and speak to those that are outside God's protection. Carry a burden for them and then God will carry your burdens.