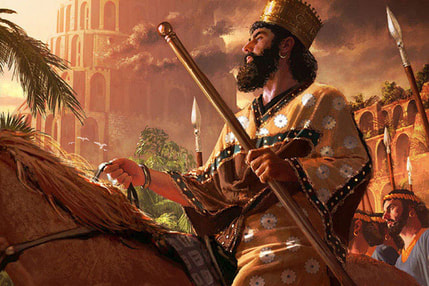 Cyrus The Great In Babylonia
By Mark Flippo

Cyrus the Great (c. 600 or 576 – 530 BC) figures in the Hebrew Bible as the patron and deliverer of the Jews. He is mentioned 23 times by name and alluded to several times more. From these statements it appears that Cyrus the Great, king of Persia, was the monarch under whom the Babylonian captivity ended, for according to the Bible, in the first year of his reign he was prompted by God to make a decree that the Temple in Jerusalem should be rebuilt and that such Jews as cared to might return to their land for this purpose. Moreover, he showed his interest in the project by sending back with them the sacred vessels which had been taken from the First Temple and a considerable sum of money with which to buy building materials.

This shows very clearly when God wants something done He will provide not only the materials but the man power also! Do you have a need in your local congregation? Just pray and watch what our God will do for you. Since He has the hearts of kings in His hands know that He can turn any heart your direction to help you. I am claiming that right now! We have a desperate need in our home. We are believing for our Miracle. Do you have a need you are willing to believe God for? No time like the present to see the answer come. Believe it and receive it. In Jesus name!