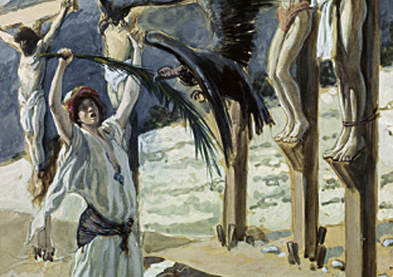 Ishbosheth’s death was the signal for the systematic murder of all King Saul’s heirs.
Rizpah means ‘hot stone’; she was the concubine of Saul and had two sons by him.
Rizpah’s sons hanged on the mountain And this of course included Rizpah’s two surviving sons Armoni and Mephibosheth. They, along with other heirs of Saul, were condemned and executed. The Bible says they were ‘hanged on the mountain’. Rizpah was powerless to stop it.
Rizpah must have witnessed their deaths, but when other people left the scene of the execution at the end of the day, she did not. She knew their bodies ought to have been taken down and buried, but no-one came to do this.
How did she react to this atrocity?
She stayed at the scene of execution, guarding their hanging bodies night and day, good weather and bad, for between four to six months. Finally David was persuaded to let the bones of her sons be decently buried.

Mother's and Father's out there, this is an example of a parent staying with their children until justice was done! Do you have a situation that seems dead to you? Stay praying and keep the evil from taking over! You can do it with God's help! Don't give up. Tenacity/willpower will pay off! Remain Faithful to God from which comes your strength!