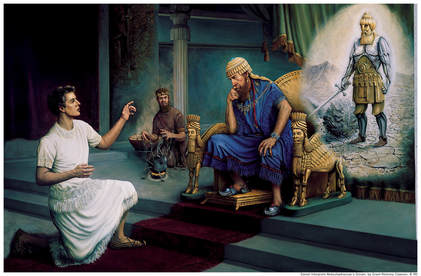 What A Dream
By Mark Flippo

Daniel 2:
39-“After you, another kingdom will arise, inferior to yours. Next, a third kingdom, one of bronze, will rule over the whole earth. 40-Finally, there will be a fourth kingdom, strong as iron—for iron breaks and smashes everything—and as iron breaks things to pieces, so it will crush and break all the others. 41-Just as you saw that the feet and toes were partly of baked clay and partly of iron, so this will be a divided kingdom; yet it will have some of the strength of iron in it, even as you saw iron mixed with clay. 42-As the toes were partly iron and partly clay, so this kingdom will be partly strong and partly brittle. 43-And just as you saw the iron mixed with baked clay, so the people will be a mixture and will not remain united, any more than iron mixes with clay.

In this statue is a progression of kingdoms after King ​Nebuchadnezzar. All have come and gone except the toes of partly iron and clay. It is in reference to a kingdom of little power. What I have been taught this represents this present world. There is no one nation anymore than is supreme in power. America has become like the clay and iron. We are not the strong and mighty God fearing nation we once were.
Sadly we have fallen from Grace because of all of the sin that is tolerated today. Everyone does what is right in their own sight. We have fallen far. Can we recover? I do not know! I would like to say yes but it seems unlikely. I have not lost Hope in Jesus because He is what keeps us going from day to day! If you will pray I know we can make a difference and at least maybe slow things down!