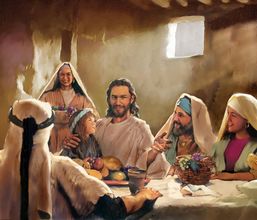 What An Odd Bunch
By Mark Flippo

Andrew was the brother of Peter and a son of Jonas. He lived in Bethsaida and Capernaum and was a fisherman before he was called by Jesus. Originally he was a disciple of John the Baptist (Mark 1:16-18). Andrew brought his brother, Peter, to Jesus.
(John 1:40)
Bartholomew Nathanael son of Talmai lived in Cana of Galilee. Tradition says he was a mis­sionary in Armenia; some scholars believe that he was the only disciple who came from royal blood, or noble birth. His name means Son of Tolmai or Talmai (2 Sam. 3:3). Talmai was king of Geshur whose daughter, Maacah, was the wife of David, mother of Absalom
James the Elder, Boanerges, son of Zebedee and Salome, brother of John the Apostle; a fish­erman who lived in Bethsaida, Capernaum and Jerusalem.
James the Lesser or Younger, son of Alpheus, or Cleophas, and Mary lived in Galilee. He was the brother of the Apostle Jude.
John Boanerges son of Zebedee and Salome, brother of James, the Apostle. He was known as this Beloved Disciple. A fisherman who lived in Bethsaida, Capernaum and Jerusalem
Judas Iscariot, the traitor, son of Simon who lived in Kerioth
Jude, Thaddeus, or Lebbeus, son of Alpheus or Cleophas and Mary. He was a brother of James the Younger. He was one of the very little-known Apostles and lived in Galilee. Jerome called Jude “Trinomious” which means “a man with three names.” In Mark 3:18 he is called Thaddeus. In Matthew 10:3 he is called Lebbeus. His surname was Thaddeus. In Luke 6:16 and Acts 1:13 he is called. Judas the brother of James. Judas Thaddeus also was called Judas, the Zealot
Matthew, or Levi, son of Alpheus, lived in Capernaum. He was a publican or tax collector.
Simon Peter, son of Jonas, was a fisherman who lived in Bethsaida and Capernaum.
Philip came from Bethsaida, the town from which Peter and An­drew came (John 1:44). The likelihood is that he, too, was a fisherman
Simon, the Zealot, one of the little-known fol­lowers called the Canaanite or Zelotes, lived in Galilee. In two places in the King James Version, he is called a Canaanite (Mat. 10:4; Mark 3:18). However in the other two places, he is called Simon Zelotes
​(Luke 6:15; Acts 1:13).
Thomas Didymus lived in Galilee.

Jesus never does things like so many would want. He brings together that most versatile group. Look around at your own congregation and see the different types of jobs and personalities that are represented there. And you thought the disciples were an odd group? Sorry, I just could not resist.